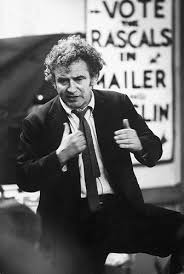 From The New York Times. Norman Mailer, where are you?!! – R. Tirella

When City Elections Were Fun

IN 1969, in the midst of devastating strikes, rising racial conflict, sinking finances, terrifying crime rates and an expanding, dysfunctional city bureaucracy, the pugilistic writer Norman Mailer made a quixotic bid for mayor of New York. The columnist Jimmy Breslin campaigned alongside him for City Council president. Far from being a gimmick, the pair electrified the electorate with bold plans and even bolder political theatrics.

“People,” Mailer said, explaining his plan to harmonize the city’s neighborhoods into self-ruling municipalities, “are healthier if they live out their prejudices rather than suppressing them in uniformity.” Imagine any of the current candidates talking like that.

Back then, the race for mayor was fueled by the outsize talent that powered New York itself. In contrast, in the current campaign season we have the spectacle of figures whose substance consists of embarrassing character defects, fiery (yawn) rhetoric and patient waiting for a rival’s implosion. The race embodies the worst sin you can commit in Gotham’s infinite niches of sin: it’s boring. Galvanizing visions? Hey, maybe there’s an app for that.

There was James J. Walker, the glamorous delinquent of Prohibition. Fiorello H. La Guardia, the funny-papers Machiavelli. John V. Lindsay, the bleeding-heart patrician. Edward I. Koch, the Coney Island tout. Rudolph W. Giuliani, the law-and-order hood. Even the unassuming Abraham D. Beame could quip, in 1965, that William F. Buckley Jr., a rival candidate, was “the clown prince of politics.” …