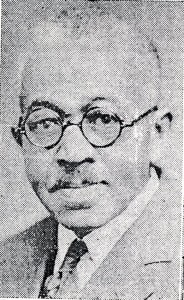 I was assigned to cover the Charles E. Scott plaque unveiling ceremony on the 2nd floor of Worcester City Hall, last night, just outside the Election Commission Office and had the great fortune to ride up in the city hall elevator with the members of the Scott family who had come to honor Ronald Scott’s grandfather, Charles E. Scott. He was the second person of color to have successfully won a seat as a Worcester City Council member way back in 1918, serving until 1921, and again winning a seat in 1926 which he held all the way to 1937.

Along the way to the ceremony, the elevator stopped on the first floor where we were joined by Parlee Jones, another InCity Times contributing writer and a well known Worcester activist. I, being the garrulous and gregarious type of person I am, struck up a conversation with the Scott family leader, Ronald Scott, while waiting for the elevator to arrive in the basement. We talked about Worcester, and its people, and what it is about Worcester down through history that sets our city apart from other places.

It is the Worcester melting pot of various races, ethnicities and cultures working together to make the city a better place for all that sets us apart from other places. I believe we’re a city where anyone from anywhere can come to find a sense of community, acceptance and opportunity, as evidenced by Charles E. Scott.   Worcester has a rich and plentiful history of examples of notable citizens that have risen above challenges placed before them to achieve their version of the American dream.

Charles E. Scott was small in stature, and when he spoke before a crowd, he would stand upon a wooden “soapbox” which he used to carry with him everywhere. That very same wooden soapbox was presented by Dr. Thomas L. Doughton, College of the Holy Cross Professor, while he explained just how it was that Charles E. Scott was able to become elected to the Worcester City Council in a district with mostly white, European voters.

It was not until 50 years after Charles E. Scott left office that other people of color were able to succeed winning election as City Councilor. Stacey DeBoise-Luster was the first female of color to have that privilege when she successfully ran for Worcester City Council in 1997, becoming the first female African American City Council member in 1998, and serving two terms. During her second term she resigned her seat to take a full-time position with the Worcester School Department as Human Resources Director, a job which she still holds today. Her exit made it possible for Juan Gomez to become another Worcester person of color to attain the office of City Councilor, as he was the next highest vote getter in that election.

As was pointed out last night by Worcester City Councilor at Large Morris “Moe” Bergman, Worcester is a city where people have a fair chance at obtaining their goals based upon the content of their character, in the immortal words of the Reverend Dr. Martin Luther King Jr., rather than the color of their skin.

I was glad to have had the opportunity last night to see, meet and greet the many Worcester notables and citizens who attended the ceremony honoring Charles E. Scott: Barbara Haller, Bill Coleman, Moe Bergman, Gordon T. Davis, John Monfredo, Juan Gomez … .

And the cake that Bill Coleman arranged to have donated by Stop & Shop supermarkets was delicious and historical! The left side of the large cake was vanilla, and the right side chocolate, with a fresh strawberry sauce between the layers – on top a lithographic image of Charles E. Scott! The Scott family was able to take home the center portion of the cake with the lithographic image of their grandfather, due to Bill having had the foresight to bring a couple of aluminum trays with plastic covers along. Bill took home the rest of the cake.

I believe Worcester in unique! It is my birthplace, and a place where people can thrive, if they obey the law, work diligently and apply themselves to the goals they have in mind. Charles E. Scott was a prime example of that …

Your opinion counts! You may contact me at: Ronaldoclair@hotmail.com