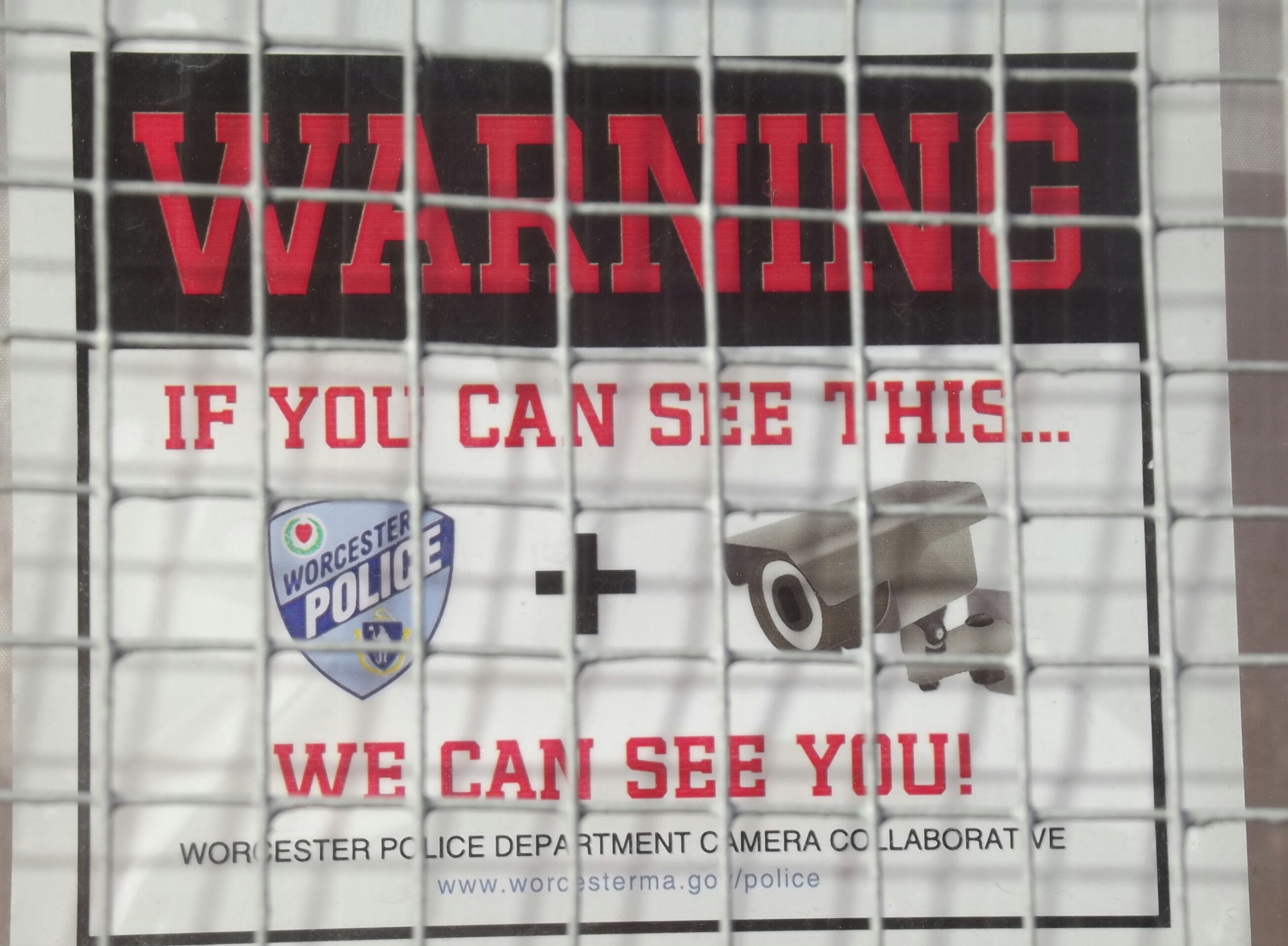 The photo is of the warning sticker the Worcester Police give to Worcester residents or biz owners who participate in the program.     pic – Ron O’Clair

There is a new tool in use in Worcester in the ongoing efforts to deal with the seemingly ever increasing crime rate that is predominantly due to the rising percentage of the citizenry who participate in criminal activity that is focused on maintaining illegal drug habits.

The tool I mention is the Worcester Police Department’s Camera Collaborative that allows property owners to allow the Worcester Police access to the feeds from any surveillance camera’s that are installed in efforts to curtail or decrease the likelihood of criminal activity in certain areas.

While the police will not monitor the feeds continuously, they will be able to use the images stored on the systems memory to help prosecute the guilty when crime occurs in range of the camera’s that are registered with the collaborative by being able to go into the memory of the systems to retrieve data recorded that may show investigators crucial evidence that will help prosecute the criminals.

As I author this story, there are four Worcester Police officers in my rear parking area as a result of a call I made based upon seeing another two in a long line of trespassing drug addicts who continually come onto the posted private property located adjacent to the old location of the P.I.P Shelter and shoot Heroin or smoke Crack Cocaine behind either my dumpster, or the vehicles parked there along the rearmost portion of the property where they indulge in the drug of their choice and leave behind the evidence of their having been there with used needles and other drug paraphernalia associated with drug use.

In most previous calls, the police responding would most generally allow the trespassing individuals to leave the property without taking any legal action against them, which resulted in their coming back again after the police went on about their duties protecting the lives and property of the citizens of our fair City of Worcester.

I took it upon myself to go out and speak with the Sergeant on the scene which produced a total of 4 marked patrol cars, one supervisor’s Explorer, the Paddy Wagon, and an Ambulance, to let him know that this problem has been ongoing and continuous lately with numerous instances of my having called to take legal action on the law breakers only to result in repeated instances of the same activity because the police take no legal action against those who continually trespass, though I am perfectly willing to prosecute if I have too, in order that others will get the message that they can’t just trespass at will on private property.

For as many times as the police have let these people go with a warning, I have given numerous warnings myself by informing these people in person that they are not allowed, or welcome to come do their drugs on the private property. It is a frustrating situation. I have sometimes been assaulted verbally or physically when I attempt to control the situation without the involvement of the police as I know they have more important duties to attend too and dislike having to take them away from those duties to deal with these trespassing drug users, and due to response times being what they are, many times the trespassers leave before the police can arrive.

This problem seems to have grown lately with regards to the property I manage due to the criminals getting over their camera shyness which I attribute to lack of prosecution for those caught in the act of illegal activity, as well as the fact that I have not posted many new videos made off the camera feeds directly to You Tube like I did with the case of the stabbing on Main Street, and the car break on Charlton Street where a customer of the Spanish Grille had items stolen from her vehicle when she inadvertently left her window open allowing a thief to take advantage of her own carelessness in a crime of opportunity.

For a time there after I installed the system, the area had become a ghost town at night compared to before, and lately they are coming back out there at night, all night long along the side and front of the property engaged in the criminal conspiracy to traffic narcotics in the 700 block of Main Street. They are being helped by certain of the tenants to have access to the interior of the building, and are causing disturbances and inconveniences for the people not involved in illegal activity.

The Camera Collaborative of the Worcester Police Department can help identify those individuals committing crimes in our City of Worcester, and I urge property owners or managers who have installed systems to participate in it.

The contact person I have is: Sergeant Anthony Petrone of the Real Time Crime Center of the Worcester Police Department at (508) 799-8658 who you can contact for more information about this program.

The result of the call I made today about the trespasser’s resulted in the female going away in the ambulance, and the male suspect being taken away in the Paddy Wagon. I believe that this had nothing to do with my speaking to the Sergeant as I had noticed they were detaining these individuals prior to my going out to speak with them. I believe they are getting tired as I am of the same people doing the same things over and over again. I am a huge proponent of treatment and recovery from drug and alcohol addictions and have hopes that those people will see the light and get the help they need to overcome the addiction that drives them to break the law.

Sad to say, Wanda Luz-Diaz, one of those whom  I had helped get into recovery through involvement with the judicial system has relapsed and is back out there among those that hang around the outside of my building up to no good in her quest for another fix, or hit, whatever she can manage to obtain.

There are many who hate me for what I do, not understanding that I believe that leaving addicts in the misery of their individual addiction is playing Russian Roulette with their lives. Intervention and treatment is a far better option than waiting for them to take the hit, or inject the tainted dose that kills them. There is that old saying about if you can’t help an addict, don’t hurt them. What they fail to see is that by doing nothing, and not intervening or trying to get them the help they need to overcome their addiction is hurting them, and those that love them. Getting them into recovery whether they want it or not, is not hurting them, it is helping them resume a better way of life, just like the girl from the “zombie walk” video I posted, who because of the video is still clean and in the life of her little girl after having been addicted and on the streets around my area of concern the 700 block of Main Street. Samantha made the decision to seek treatment and do what it takes to remain drug free, which is the only way it will work. My video was responsible for her making up her mind to get the treatment that saved her life.