Text and photos by Dorrie Maynard 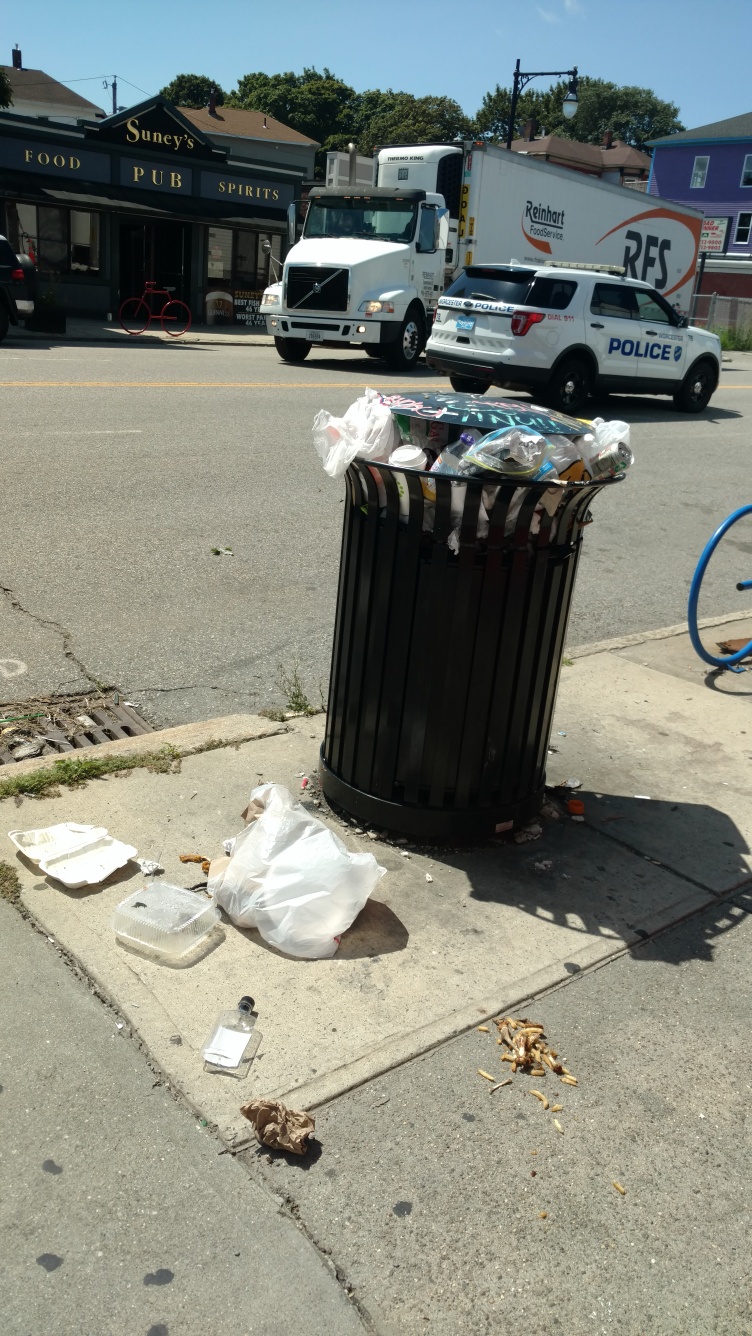 First things first: I would like to mention that I happened to be driving down Chandler Street on a recent Wednesday and was completely shocked and disgusted at the trash in and around the garbage cans along the street.

When I went home, I called customer service in Worcester and asked who was in charge of emptying the trash cans, assuming it might be the city’s DPW. 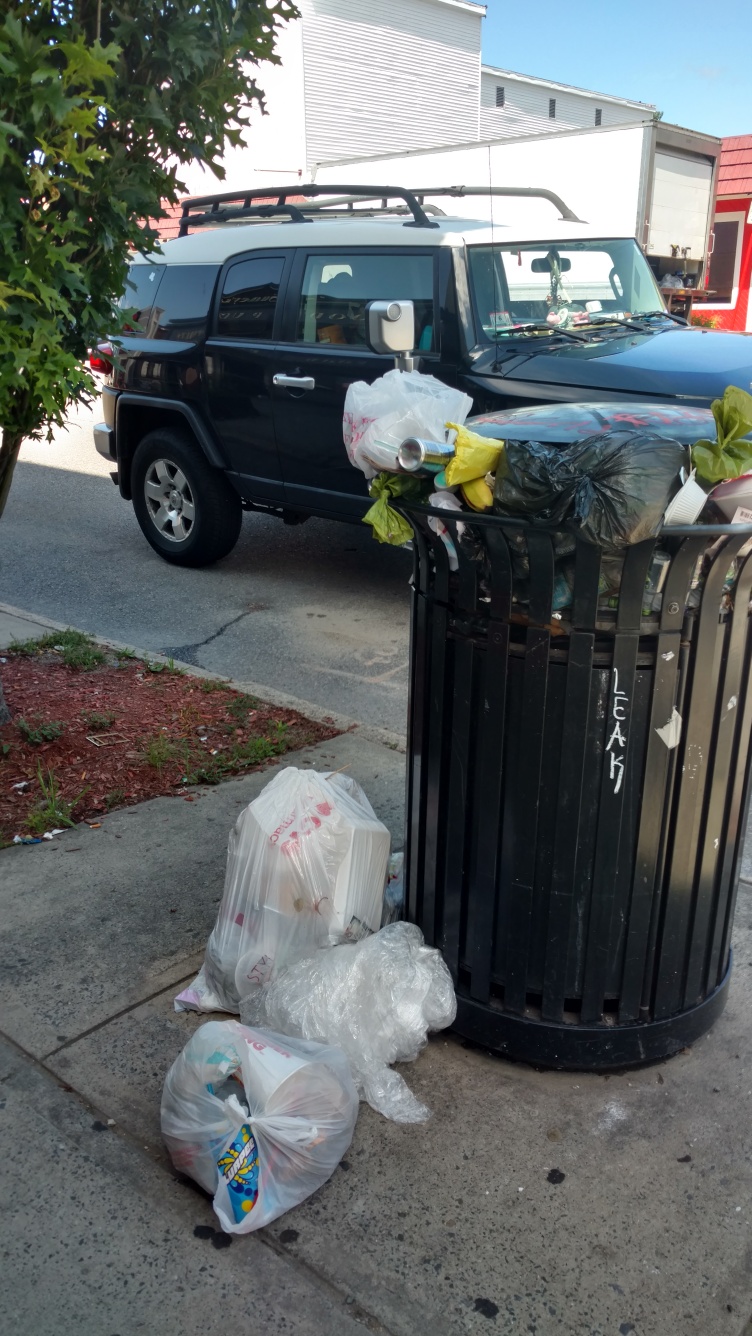 I was told it was the Chandler Business Association: they had requested that the trash bins be put in place, and they are responsible for emptying them. They gave me a number to call (508) 304-8133. I quickly hung up and called the number. Unfortunately, it rang and rang. I finally got a message that the message box was full!

I continued to call the number over the next few days because, when I drove by the trash cans on Thursday, they were even fuller. 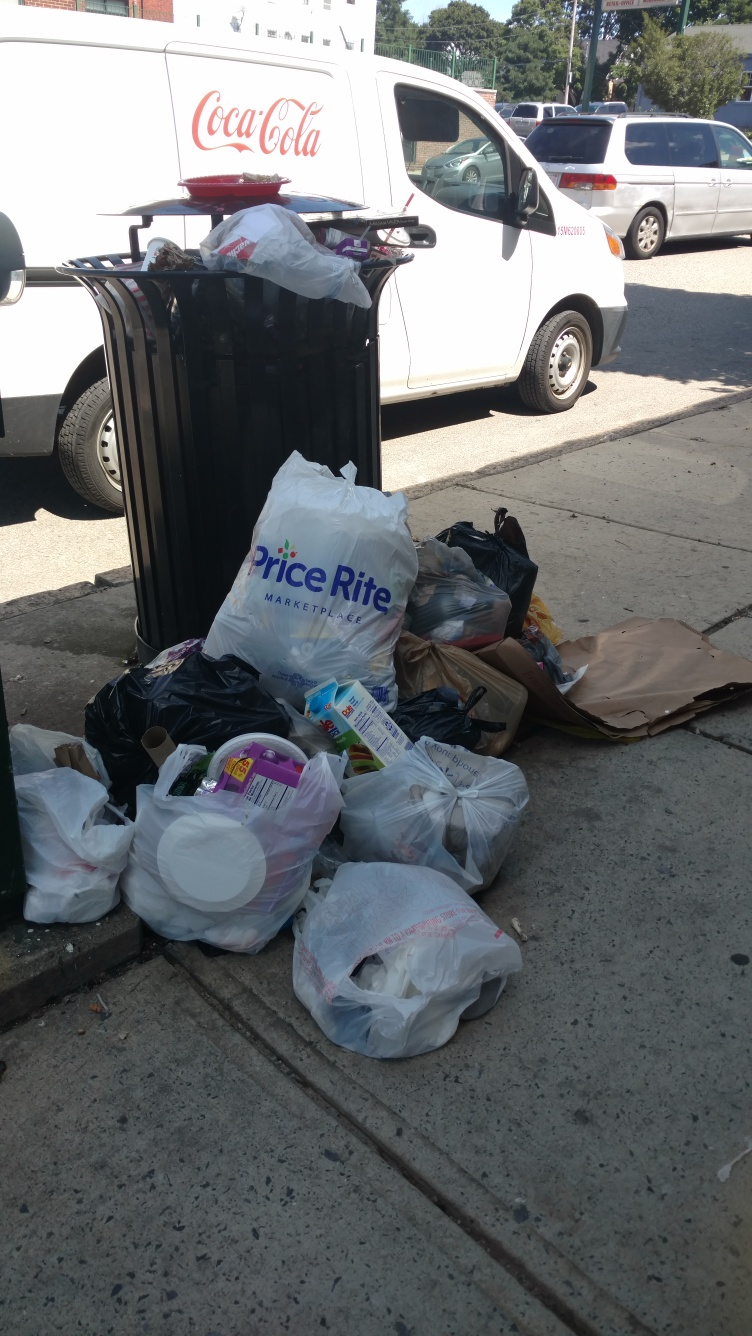 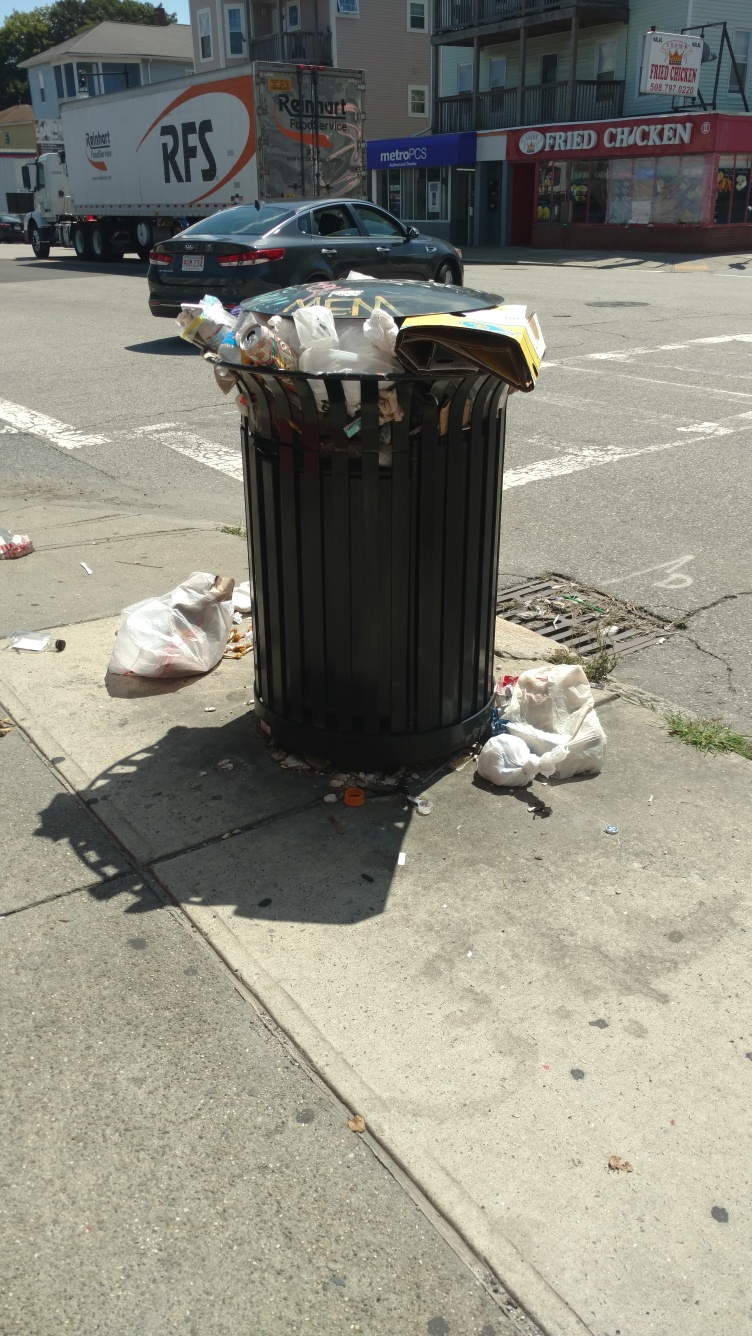 Worcester City Manager Ed Augustus, you said you were going to present a NEW, COMPREHENSIVE CITY GARBAGE DISPOSAL AND RECYCLING PLAN to the Worcester City Council. That was months ago! You still haven’t presented (produced???) your blueprint for a clean, green Worcester!- cutlines: R.T.

However, when I drove by on Friday, they had finally been emptied.
Needless to say, I will be keeping an eye on this situation.

There is no reason that the trash cans on such a busy street should look like that on ANY given day.

If the Chandler Business Association requested these cans, they should be held accountable for the way they look, are emptied, and portray the city of Worcester. With all the new developments heading this way, residents and business owners should be able to take pride in the way their neighborhoods look and how their street corners are maintained.

Speaking of street corners, I would like to mention the great job that was done on replacing the corners of the sidewalks in and around my neighborhood. Unfortunately, I was a bit baffled as to why just the corners were replaced when the sidewalks are a complete mess. Once again, I called customer service and asked. I was told the sidewalks are scheduled to be replaced, but I was curious as to how all the sidewalks around Becker College (on Sever Street) have been completely redone over the past few weeks (seeing that they don’t pay taxes to the city and the locals that own property do). I was given the name and number of an Emily Paulson. I left her a message and have not heard back. I guess I will be keeping an eye on this situation as well!

Giving the benefit of the doubt, maybe Becker paid for the sidewalks privately??? I see that my property taxes keep going up, and I am not seeing the improvements to justify it. Hoping to be proven wrong, as I would love to see and have new sidewalks!

Last but not least: I met a young man who I wanted to write about because of his situation in the city. His name is Ryan Lawrence, he is a 30 year old homeless man in our city. I became curious as to how he ended up homeless. I have seen him in my travels over the past year or so.

I decided to ask him if he would be willing to share his story. We met at the Worcester Public Library. He said his wasn’t much of a story: He had a very loving and supportive family. He grew up in Spencer, and he had been adopted from day one. He told me it was his career choice that somewhat gave way into his becoming homeless. He is a licensed barber and hair stylist. He explained that he had a party lifestyle because he never really had a set schedule as to when he had to show up for work. He paid $150 for a chair per week at a shop and could come and go as he pleased. He also had a set up in his apartment and could make $20 cash per hair cut all day long. It was the drugs and drinking between appointments and even during appointments that lead him on a five year downward spiral.

In an atmosphere that is not at all conducive to being and staying sober (which he has been for four months) I found it impressive that he has been able to maintain his sobriety.

Ryan said he decided that he was in an “awkward limbo” and needed to climb out of a hole. He wanted and needed to make a change. I had seen him struggling in the past, but his recent recovery really gave me hope for anyone that wants to heal and is willing to put in the effort to make it all happen.

Ryan pretty much keeps to himself in and around local food pantries. He lives in a self-reliant “camp” on the outskirts of Worcester. He is able to shower and keep himself clean by using the facilities at CHL. He takes pride in his appearance and it shows: he is always clean and shaven.

Ryan believes homelessness is caused by people having faith in chemicals and the system that enables them, as opposed to having faith in themselves. It’s hard work to take a look at yourself from the outside and work your way inwards. He thinks people would rather take a pill from a doctor that tells them their “issues” or buy drugs from a dealer to keep themselves medicated and complacent. He truly believes that exercise, a good diet and being self reliant have been what has allowed him to continue with his journey.

He reads about ­Buddhism and is very well spoken. We talked for well over an hour about all kinds of things – from self will, government, God, narcan and the natural order of life.

Ryan is hoping to meet a girl someday who shares his values and way of “found life” – perhaps live in the rural parts of Wyoming and be self-reliant … or maybe journey to India and never return.

Either way, I wish Ryan luck in his journey and I admire his strength and determination to be a ­survivor.

Should this woman-abuser be allowed to determine ANYTHING woman-centric for all American women? NO!!!!

No to Brett! The Supreme Court – We the People! – deserve integrity, justice for All.

Laughable: Trump an alleged perv, most likely a pedophile (miss teen pageant door-buster … creepy photos with young daughter Ivanka … telling an interviewer if she weren’t his daughter he’d fuck her) vouching for Kavanaugh. As if Trump’s recommending “this fine man” means anything to anybody. It doesn’t. . – R.T.